“When I started in my role as CEO of Bibby Financial Services, I was struck by how embedded our businesses are in our communities and how committed we are to them.

Over the last year I have come across some amazing personal stories of inspirational colleagues and teams, not just within BFS but across the group who are willing to go the extra mile and give back to the communities they live in.

Since 2007, as a group we have raised an incredible £10.4m for charity and donated thousands of hours as part of our award-winning Giving Something Back programme.

I want us to do even more, and I truly believe that with such passion within our businesses, that we can. With the purpose, connection and direction Compass offers, let’s work together to evolve how we connect and give back to our communities.

Initially we’ll focus on 1) Reigniting our brilliant Giving Something Back Programme, so everyone is aware of its benefits, 2) Encouraging us all to get out and volunteer in our communities through our new ‘Donate a Day’ initiative, and 3) Ramping up working with local schools and colleges so we can start to support disadvantaged children better.

Below is just a summary of what we’re doing already, where we want to be and how we’re going to get there. We can put these things in place, but we need you to bring them to life. We hope every one of you will join us on this exciting journey as we strive to improve the quality of life for all in the communities in which we work and live.”

Our Trailblazer areas of initial focus

1. Giving Something Back Reignition

We are relaunching our Giving Something Back Programme to all colleagues, reminding everyone of the benefits and how you can get involved. Everyone has access to match-funding benefits and central event challenges. We’re also evolving our offer so more colleagues can get involved through more services, including salary sacrifice. As a family company we want to encourage, incentivise and reward colleagues for making a positive impact in communities, so that more of us can support the good causes we care about.

We’re putting plans in place to introduce a new volunteering initiative, encouraging you to take paid leave and volunteer within your local communities for a good cause. As a company committed to the communities within which we operate, we want to make it easy for you to take part and make a difference locally. It could be on your own or a team activity, let’s find and share opportunities to connect with our community, and start to give time back to the people and causes that need it.

We will be connecting more with local schools and colleges from disadvantaged areas, offering time to colleagues to work with students and grow partnerships with our community education institutions. The schemes will be led by schools and we’ll listen and support where we can. The aim is to help improve prospects of students who face challenges in their lives to develop skills and aspiration to progress in their education and careers.

With the support of the Giving Something Back programme, Luke Froude, Bibby Financial Services Head of Client Service, has done an astonishing amount of fundraising in memory of his son Finnley, who sadly passed away in 2010. Here’s Luke’s story:

“Last year marked the 10th anniversary since our Son Finnley Froude was born.

“Finnley was born 3 months premature and weighed just 1lb 4oz. He was in hospital in Oxford for 125 days but sadly passed away before he came home.

“We have fundraised for the Charity that supports the premature baby unit at Oxford SSNAP (Support for the Sick Newborn And their Parents) for the last 10 years in his memory.

“In 2020 I planned to run 10 separate 10k races over the year and hoped to raise the last £10k. We started with organised events with friends but then the pandemic hit and we had to re think.

“We missed a month but then managed to organise solo runs where friends run at the same time but in their own locations and then later in the year we did run together (At a distance) to complete the 10 x 10k’s .

“Our 3 year old son Henry even managed to complete a 1k kids race in memory of his brother dressed as Where’s Wally in London in early March before the Adults did the 10k adult version.

“At the last race in December we ran and finished at the Banbury cross where unknown to us the SSNAP Directors and trustees had gathered (Distanced) and presented us with medals.

“We raised a total of £11,265.22 in 2021 for SSNAP including Bibby matching with many Bibby colleagues, friends and family taking part.

“This took us well over the £100k mark in memory of Finnley.

“The Bibby Giving something back programme is an amazing way to help and support your chosen charities and I would highly recommend everyone get involved some way.” 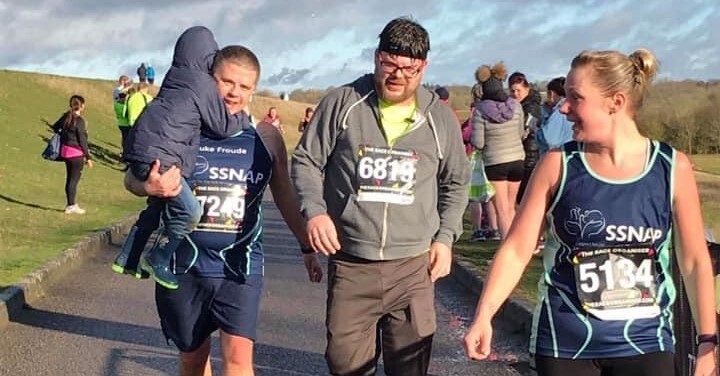 Luke (left) taking part in one of his charity runs

There are a few ways you can get involved and help contribute to our Community Vision and Goal:

Fundraise in your local community or at work and boost your fundraising activity through our Giving Something Back match-funding and salary sacrifice offer. Be sure to share your story with the GSB team too!

We’ll shortly be sharing guidance on how you can take paid leave to volunteer. In the meantime you can find out more about volunteering in the link below. Be sure to share your story with the GSB team to inspire others too!

Connect with a local school

In the future we’ll be working closer with schools. If you are interested in doing something with your local school or college, talk to your Community Lead within your organisation who can help and offer guidance​.